Showing posts from December, 2008
Show all

December 23, 2008
I've been meaning to write about this for over a year now. My parents' neighbor is solidly insane. A little while ago my parents had a fence built, dividing their property from his. The neighbor (let's call him Gonzo) was solidly pissed off by this since he didn't realize all that land was my parents', and in retaliation, he tied a pair of soiled pants to a clothesline facing the property line. Gonzo told them that the pants meant "kiss my ass," but like abstract art, I believe threats are open to interpretation. For example, there's no reason to think this symbol doesn't also mean "I'm naked," "I'm clearly bat-sh*t crazy," or even "I'm protesting the child labor that went into making these Gap khakis." In all likelihood, all of the above answers are correct. The reason I bring this up now is that it's been over a year since the pants went up and... they haven't moved. I appreciate Gonzo'
5 comments
Read more 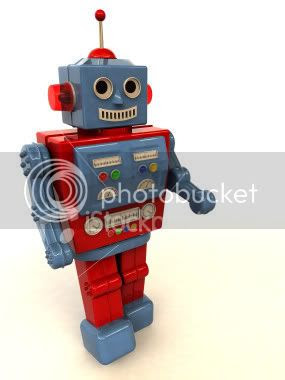 In my travels through the internet I occasionally wish to give out an email address that I have no intention of checking. For this very purpose I have created my very own spam address: SpamBot85@gmail.com. Now, uh, let's say for argument's sake that through a constant barrage of the worst the Internet has to offer, our friend Spam Bot85 may have spontaneously developed consciousness. (Let's also say, for argument's sake, that this was in no way my fault.) Everything Spam Bot85 knows is based entirely off of Viagra ads, Oprah's weight loss solution, and cheap top name replica watches. Within seconds of becoming sentient, Spam Bot85 knew that he was too flaccid, fat, and unfashionable. Luckily for Spam Bot, it also turned out that sexy singles in his area wanted to meet him... and some old college acquaintances were looking to reconnect. He also won a $50 gift card to Applebee's and he's earned several advanced degrees from the University of Phoenix.
2 comments
Read more

A Nice Doomsday for a Gay Wedding

December 15, 2008
I was sure that after I wrote about the end of the world in the last post it would go away forever, since that's what happens to most things that I write about. But no, the end of the world made a repeat appearance in my life yesterday, and seeing as how doomsday is one of my pet interests, I'm giving it another 700 words. At an end of the semester class party, a classmate mentioned that she had a list of things to do before the world ended in 4 years. She called it a bucket list, but it might more accurately be referred to as a Four Horsemen list, a Boomsday list, or of course, a Galactus list. I'm a great lover of lists , resolutions to live your life to the fullest, and challenging yourself in potentially catastrophic ways , so naturally I'm all for the Galactus list project. I was especially impressed since the thing she had already checked off the list was getting married. That takes some chutzpah . She also revealed that she's getting divorced now, as sh
1 comment
Read more 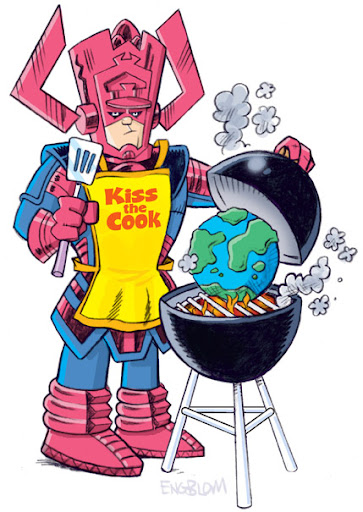 Cue the music. Sarah's friend Jamie told her, while studying for finals, that she hoped the world would end in 2012 so the grades for the semester wouldn't matter. Now I'm all for the world ending, and if the Mayans called it, all the better. But before wishing the world explodes, implodes, or gets eaten by Galactus , there might be a few easier ways to weasel out of finals. 1. If you have to send in a final paper via email, send in a corrupted file. You give your professor a correctly named file, say "Ezra's Legitimate Term Paper," and through no fault of your own, it doesn't open. By the time your professor realizes this and asks you for a new copy, you've just bought yourself a few more hours of work, sleep, or praying for the world to end. Sadly, this is only a stall tactic, as you will eventually have to turn in a real paper, assuming your assignment wasn't just to send a corrupted file to a professor. 2. Get sick. Standards for w
2 comments
Read more

Words to Live By

December 05, 2008
Perhaps some of you have seen this little exercise on Facebook in the past few weeks. It goes something like this: * Grab the book nearest you. Right now. * Turn to page 56. * Find the fifth sentence. * Post that sentence along with these instructions in a note to your wall. And voila, you now have a random little bit of information from one of your many tomes to brighten your day. But that's not really enough for me. I mean, you have this scrap of text, but what are you going to do with it? I then decided that I would do this exercise, but take the sentence as my personal motto for the rest of the day. The book is called Guyland. It's about how from ages 16-26, white American males are wastes of space with no responsibilities and no desire to grow up. While it's in no way whatsoever applicable to me or my equally lazy, waste of space friends, it's still a good read. Page 56, line 5. "Each of us cuts his own deal with it." I figure basing my life a
2 comments
Read more

December 01, 2008
I recently made a deal with all-powerful Atheismo that if I survived a particular encounter I would write two blog posts this week. I lived, so I'm making good on my promise. About two years ago I was back at Whitman, and Sarah came to visit for the weekend. At the same time, the other inhabitants of the Monastery, Chris and Alex, were called away, leaving us to hold down the fort on our own. In the middle of the night, Sarah woke up and thought she heard footsteps around the house. We shared our house with Abel, a depressed house painter from Oaxaca who lived in our basement and loved blasting ranchero music through the floorboards and drinking immoderately, so I assumed that any movement would surely come from him. I probably slurred something to the effect of: " 'sjust Abel... gobacktosleep'kay?" But as Sarah's hearing is much better than mine and her wake-up-ability at important times is stronger, she persisted, and we listened to more footsteps
3 comments
Read more
More posts