Showing posts from August, 2010
Show all

August 23, 2010
Another few days later it’s time for another blog. We’ve left Lake Garda behind along with its pristine waters, verdant meadows, and (allegedly) topless beaches. Next is Milan. Everything I know about Milan comes from some vague associations with the fashion industry and an abiding respect for the Pepperidge Farms cookie. I can therefore expect to find women wearing ridiculously uncomfortable shoes and a dark or mint chocolate filling whenever two identical things are near each other… possibly between uncomfortable pairs of shoes. If you ever want to see if a woman is a tourist or not, check the shoes. From what I can tell, no self-respecting Italiana would ever embarrass her country by wearing something as pedestrian as a sneaker. It simply isn’t done. But more on Lake Garda. We took the train from Venice to Desenzano, then a bus from Desenzano to Salo’. Of course, in keeping with the rest of the trip, our hotel was cheap by virtue of the fact that it wasn’t exactly in Salo’. It
4 comments
Read more 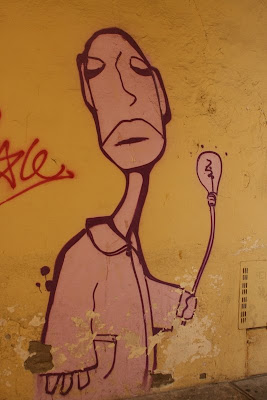 I’m writing this as a train speeds me away from Venice and on to Lake Garda. Venice is kind of like The Godfather. Even if you’ve never seen it, you already know so much about it that a true first impression is impossible. You know all about the gondolas pushed by skinny men in striped shirts and flat straw hats. You know it’s very old, very wet, and of course, the most romantic place in the world. It’s also hard to have a real first impression of Venice because there are so many people having the same impression at the same time. I cannot say this enough: there were a ton of tourists there. It’s like Disneyland if half of the rides were churches, and the other half were waiting in line to go into churches. But acknowledging the inherent problems with any discussion of Venice, let’s talk about Venice. For the first full day we were there, I was convinced that it was a miserable place. It was as if you reenacted the last days of the Roman Empire and the last 10 minutes of the Titanic
2 comments
Read more

August 13, 2010
About 4 years ago I picked up a book called “Heat” from the library. I originally thought I was reading the book version of the 1995 action movie staring Pacino and DeNiro . Instead it was a nonfiction book about Bill Buford’s quest to become a kitchen slave to Mario Batali and, eventually, to learn from master butcher, Dario Cecchini in the small Italian town of Panzano. There were few high-octane shootouts, but I loved Buford's encounters with Dario, the Dante-quoting butcher who screams at offending customers, bites a raw piece of meat when a tourist asks if the cut he just bought was good, and generally seems like a knife-wielding badass. I wanted to meet this butcher. While planning this trip to Italy, I figured this was the closest I’d yet been to Panzano, so I might as well stop by Dario’s butcher shop, hear some Dante and get yelled at. And so, I look up Panzano, find it on the map 10 km away from the balsamic-producing city of Modena (pronounced MOH-dena, if you want
2 comments
Read more 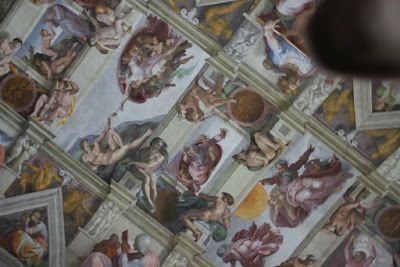 So it's been a busy few days and lots of interesting things have happened. Unfortunately, so many interesting things have happened that I've been far too busy to write about all of them, and as a result, I have a bit of a backlog on half-formed fascinating travel stories. I will first do a quick run-down of everything I'm not posting on: 1. There's a guy at the Sistine Chapel whose only job is to shush people and tell them not to take photos. First, I kinda want that job. Second, he totally failed. That's right, guy. You had two jobs and you messed up half of them. That's like a bed and breakfast that only serves flan. 2. If you want to be a part of a statue that survives for hundreds of years, I have two bits of advice: first, don't be male genitalia. Second, be made out of bronze. There's a collection of marble junk that's been broken off over the centuries and when it's gone, man, it's not coming back. 3. If you're a kid and you c
6 comments
Read more

Rome If You Want To

August 06, 2010
Editor’s Note: For the next 3 weeks, Ezra and Sarah will be traveling through Italy. Then there will be 4 months of studying abroad Denmark. Or “Eat, Bike, Eat”. Also, I wish I actually had an editor. -The Editor...? Morning, world. I’m writing this at 2am Roman time. I’m awake because, when in Rome, get really jetlagged, as the saying goes. Sarah and I stumbled through our first day in a blur of pizza, panninis, and pasta. Since I’ve just recognized a pattern of P-only foods, I can look forward to polenta, prosciutto, and pimentos. Lots of pimentos. So far we’ve met a middle-aged couple from Orange County outside of a museum who was bummed about nothing in Rome being open at the times they wanted. “It’s really hard to see anything in Rome,” they said. “And parking’s terrible.” While I do want to make fun of them an appropriate amount for wanting to experience genuine Roman traffic culture up close and stupidal, I can get behind this idea of “it’s really hard to see anything.” Fir
1 comment
Read more
More posts