Showing posts from July, 2009
Show all

Sarah's been law clerking in Oakland over the summer at the International Institute of the Bay Area , working with undocumented immigrants who've had terrible stuff happened to them, and through the quirks of US immigration policy, are able to parlay those terrible experiences into legal status. Thanks to the U Visa , if you're the victim of a violent crime and help out with the police investigation, you could become a permanent resident. It's like winning the lottery , only worse. Of course, that's assuming you're in a sanctuary city where the police won't call ICE to report you. If you're not in a sanctuary city, then your reward for being a victim of violence might just be deportation, which by all accounts is a pretty crappy prize. Anyway, with Sarah's temporary addition to Oakland's workforce, I've become a temporary addition to Oakland's tourists. I don't know what you've heard about Oakland, but there's really on
2 comments
Read more

Doing It The Hard Way 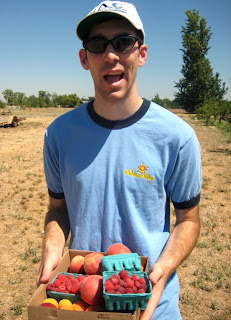 12:00pm, 7/14/09. At the F Street movie theater, there's a line wrapped around the side of the building filled with a group of teen girls (and some boys) dressed up in capes and Gryffindor ties. They have another 12 hours to go before Harry Potter 6 premiers, and the high in Davis today is 103 degrees. To add to the spectacle, there's a channel 3 news van parked outside, and a reporter with slick hair is putting in an earpierce before reporting on these fans. I think the reporter's either Mike , David , or Brian , but honestly all their hair looks pretty much the same. Despite anything else you can say about these kids, they definitely care about Harry Potter. And I bet they're going to enjoy the movie more than anyone else in that theater. For it is as that famous dead white guy said, "That which we obtain too easily, we esteem too lightly." I might just be talking out of my ass here, but I think old T-Paine has a point. My life is pretty easy. Ru
1 comment
Read more

July 05, 2009
Here are some things that make guys act like jerks: Being in the dark Alcohol Being near a girl Being far from girls Other people having a good time Not being the center of attention By my count I have two sources of child-like wonder left in my life: Pixar movies and fireworks, and I'll be damned if I let jerks ruin either of them for me. Here are some things I don't need to hear you say while I'm watching fireworks. "I'm going to pee in this bottle so I don't miss the final countdown." Look guy, I don't know you. Everyone pees, and sometimes, yes, it's necessary to pee in a bottle. But it's almost never necessary to tell 100 strangers that you're about to pee in a bottle. I can think of maybe three situations where it might be important to give this kind of announcement, and one of them involves a magic trick, two of them involve an apple juice factory, and none of them involve marring a majestic fireworks display. "It's
3 comments
Read more
More posts